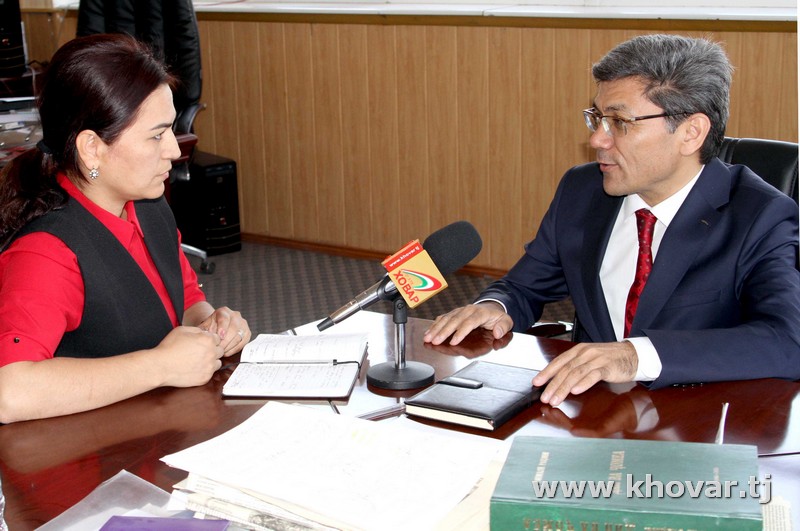 DUSHANBE, 13.09.2019. (NIAT Khovar) – On the eve of the annual meeting of the OSCE Office for Democratic Institutions and Human Rights, which will be held in Warsaw with the participation of nearly 60 countries, including Tajikistan, NIAT Khovar’s correspondent Mavjuda Anavari spoke with one of the members of Tajikistan’s official delegation, Advisor of the Director of the Center for Strategic Studies under the President of Tajikistan Abdulloh Rahnamo.

Anvari: What is the purpose and significance of OSCE’s annual meeting or the Warsaw Conference and why is much attention paid to it?

Rahnamo: The annual meeting of the OSCE Office for Democratic Institutions and Human Rights is one of the world’s largest forums on democratic values and human rights issues. It is attended by OSCE member states, dozens of national and international organizations, wherein 2,000 deputies consider a range of issues for two weeks.

The meetings include dozens of sessions and side events dedicated to specific issues. Each state, presenting its position in terms of ensuring democratic values and human rights, reports on these issues and defends its policies. At the same time, the positions of participating states may be criticized by their opponents or international organizations. The atmosphere of this summit is usually heated, and every year attracts great attention from international news agencies.

Anvari: What are the goals and objectives of the official delegation of Tajikistan?

Rahnamo: In my opinion, the mission of each state delegation is, first of all, to represent and protect the national and state interests of Tajikistan. I can identify three main objectives of the delegation at the Warsaw Conference. Firstly, the correct presentation of Tajikistan’s state policy. Secondly, an objective presentation of the realities of society in Tajikistan, and thirdly, to make sure that the questions and requests of the conference participants are clearly formulated. The purpose and mission of the group is precisely this.

Anvari: Social networks and news agencies call the Warsaw Conference a “debate platform for the state delegation and the opposition.” Is such a meeting or discussion with representatives of the so-called “opposition” really envisaged at this forum?

Rahnamo: Previously, negotiations with the opposition were not discussed at all. In general, there was never any disagreement during these conversations and appeals of our delegation at these international conferences. At the OSCE conference, which consists of official delegations of 56 countries, we represent and defend the position of Tajikistan on the agenda topics.

It is the state of Tajikistan that is the member of the OSCE, -not a separate Tajik organization or an individual. Therefore, the state as an official member participates in the conference. Regardless of the presence or absence of opposition parties, the state delegation carries out its mission.

Anvari: Is there a need for dialogue with the discontented people and the so-called “opposition”?

Rahnamo: Tajikistan has extensive experience in carrying out peaceful dialogue and negotiations. But now, specifically with whom must it be in dialogue? With a few disgruntled people who fled from responsibility and are now living comfortably in Europe, and who remotely oppose through virtual and fake networks? In political practice, dialogue with a political power or an organization is possible, at least if it exists physically, and its members, followers and its social status in society are clearly identified. But it is impossible to negotiate with something that exists only virtually.

At the same time, if we look at this issue from the other side, the perspective of those who are abroad and seek to present themselves as the opposition, regarding the state of the country is completely old-fashioned and unrealistic. Analysis shows that Tajikistan today is not the state that it once was in 1992, nor the state that it was in 1997, and not even the state that it was in 2015. In addition, they cannot fathom that Tajikistan today is a strong and stable state, from the point of view of politics, law enforcement agencies, the economy, and intelligence; it is much stronger than ever before. Tajikistan does many more important things. The state is engaged in beautification, creation, unity. The state is making new history. Therefore, the confrontation of several people cannot pose a serious threat to the great creative and spiritual process. Only in terms of information, it causes some hindrance and is a source of embarrassment from an ethical point of view…

Anvari: As you know, representatives of the “opposition” will also take part in the Warsaw event. How likely is the probability of dialogue between the official delegation and them?

Rahnamo: I once again emphasize that we as a delegation are not sent to negotiate with the opposition. However, if we come across any of these Tajik citizens at the conference, it is natural that we will talk with him as to other citizens, – such is our culture, national education and humanity. But from the point of view of their political position, we will explain to them that they should end their cause, cease to oppose the state and nation, and as citizens return to Tajikistan. Hundreds of their associates have voluntarily returned and are now living freely in Tajikistan. The homeland is flourishing and developing. Let them not interfere in the peace process, -we went through that before.

The former leadership of the banned religious party and thousands of its former members are freely living and working in the country. I often see them in the streets and market; among them are Mirzomuhammadi Navid, Saidibrohimi Nazar, Mavlavi Ayomiddini Sattor, Abdurrarimi Karim, S.A. Nuri’s children and others. I recall that they were not less radical than the currently dissatisfied individuals, but they chose the right path and today they are living calmly in their homeland…

Today, the state has amnestied even those who have voluntarily returned from Syria and Iraq. To date, nearly 200 people have returned voluntarily. Even the Criminal Code of the Republic of Tajikistan has been amended to facilitate their return.

Anvari: Ambitious individuals on social networks are concerned about the participation of an authoritative Tajik delegation, and steps are already being taken to disseminate news and reports against the members of the delegation. In particular, they are calling you “a former representative of the opposition,” “an obvious instrument of the government,” etc., and are paying special attention to your participation in this conference. In what status will you participate in this event?

On the other hand, I probably have much more experience in government bodies than most members of the delegation. Every year I take part in several regional and international conferences. The Warsaw meeting is the next conference.

Anvari: In any case, they put forward a version on social networks that they supposedly chose you for this conference for a specific purpose…

Rahnamo: I am very pleased that the delegation of the government of Tajikistan this year was formed from specialists competent in their industry. Therefore, we do not need to additionally rehearse what is needed and not needed to be said in Warsaw. We will act exclusively within the framework of state policy, our specialty and the official goals of our delegation.

Personally, in addition to working in government departments, for many years I have conducted research on the relation between the state and religion, political parties, especially religious movements, terrorist and extremist organizations. I wrote several books on these topics. My position on this issue is clear and concrete. Therefore, as an expert, I can freely express my thoughts. I always uphold my position.

Anvari: On the whole, as an experienced expert, you evaluate the potential of the state’s opposition, because they are very active in European circles and in the informational space…

Rahnamo: In my opinion, the potential of the “opposition” is very weak and limited. Their patrons are probably very powerful, but their potential is negligible. Two simple circumstances indicate their weakness. From the point of view of the organizational and personal structure, there is no real force left there. Even if a few dissatisfied people call themselves the “National Alliance,” the essence of the issue or the political balance will not change. Therefore, if someone imagines or expects that the state will sit at the negotiating table with such people, as an organization or political force, then it is deeply mistaken. The state can perceive and amnesty them, not as an organization, but rather as an individuals and as voluntarily returning citizen. This is a real option.

Secondly, if we consider the materials that have been published in the news agencies and networks over the past two years, we can observe that they are engaged in idle talk. Ninety percent of their material consists of slander, insult, libel, swearing, outright lies. This indicates the extinction of the potential of these people. This eloquently suggests that they have no words, programs, ideas for society. Much like a candle which on going out, obscures the eyes with the smoke.

Personally, I do not cease to be amazed at the behavior of those who still call themselves religious and Islamists. Does the Islamic religion allow its followers to lie, dodge, or slander? Can a Muslim really enjoy cynically insulting someone’s father or grandfather, the spirit of the deceased, someone’s daughter or mother, to publish a frank libel against anyone?

If a defeated person cannot in any way deny the position, program, actions, achievements of his opponent, then he goes over to his personality, to insulting his loved ones. This is an indicator of baseness. Such actions can never earn the trust and respect of society.

Such people are probably glorified in the informational space, known for their scandals, lies, abuse, libel. But these people will never be accepted by society, they will not be able to influence something, especially in the information space of the country. If they can make an impact, then only negative and destructive, but not creative at all.

Anvari: With what feeling are you going to an international conference as a citizen of Tajikistan?

Rahnamo: Personally, I am going to this grand international conference with a proudly raised head, with a high sense of responsibility. I am sure that all the members of the delegation are traveling with the same feeling. With a sense of pride that they are representing a well-maintained, beautiful country where peace and stability reign. I bring with me joyful news about the improvement of Tajikistan, about the constructive messages of President Emomali Rahmon, about the pride in the unity and sustainability of society in Tajikistan. I bring light from Rogun’s radiance, flowers of beautiful Dushanbe squares, fresh breath from the peaceful and stable life of the people of Tajikistan. I am filled with pride that I myself am part of this creative process, part of unity, part of this historical moment. Therefore, whoever I meet, I will talk with them with a sense of pride and patriotism.